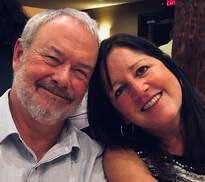 It was not planned, to open a winery, at least not for very long. We sort of stumbled onto it. It began in a friend's back yard, where he had planted a half dozen grape vines.  Talking about having an acre of land with some vines.

But... True to Bill's nature, he said, "Well, if we're going to do that, we might as well . . .".  And he said it a couple of hundred times more. Seeing just how far the road would go, before it became obvious it should be abandoned. That never happened, although eventually it has become a full time job for both of us, and the capital investment became roughly 15 times the original one.

Along the way, one acre became 60 acres. A large shed was built, then a winemaking facility, then a tasting room and event center.  Sixteen employees were hired. And the dream took shape.

Ten years ago, a psychic in Sedona told Bill that he couldn't die, because he had to, "build a large building. It's what you're supposed to do." In about 2010, yet another psychic, on Bourbon Street this time, told Bill about the "new venture he's taking on. It's what you're supposed to do. That's how the universe works. People will help you.  In fact, people will come to you and offer their services even before you know you need them." Honestly, that's how we got our marketing director and wedding coordinator.